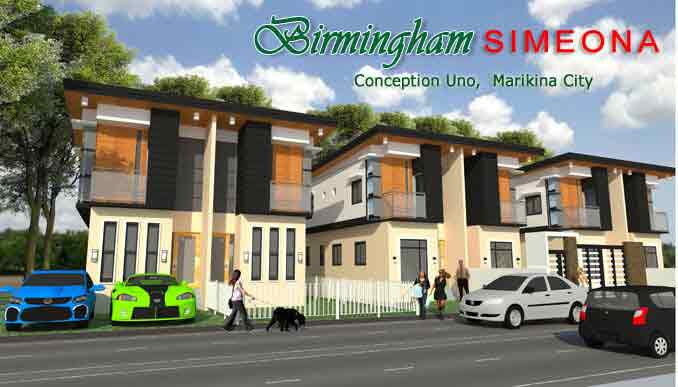 Birmingham Simeona is an outstanding house and lot community in one of Marikina City’s exclusive and most well-entrenched neighborhood and yet it will cost you only a fraction of the price of some of the upscale communities in the metropolis.

Simeona is another Homeowners Development Corp.’s (HDC) authentic and all brand new house units offering and have one of the lowest price tags in the real estate industry. The city of Marikina is also the favorite residential destination of most of the people from the nearby areas, which include Cainta, San Mateo, Antipolo and Taytay in Rizal province and some areas of Metro Manila that include Pasig, Quezon City and those from Manila because of the houses’ affordability, ideal location, nicely built houses and relaxing and totally soothing living environment. The project is in itself located in an area where several establishments, like schools, hospitals, shopping and entertainment centers, cinemas, fine dining, leisure shops, retail shops, government and corporate offices and other interesting places abound and contribute much to the city’s rapid growth. The city is also dubbed the “Shoe Capital of the Philippines”, where you could shop for the finest leather-made shoes in bargain prices. Additionallythis site has higher altitude than the rest of the city because of its proximity to the slopes of the Sierra Madre Mountains near San Mateo.

Birmingham Simeona is surely located in a vibrant and dynamic neighborhood, and yet, the site is solemn and calm, the family is certainly away from the city’s uproar and commotion. Houses offered at this magnificent enclave usually come in 2-strorey Duplex units, with 3-BR, 3 T&B, with 2 car garages, balcony and minimum lot area of 100sqm while floor area is 90sqm.

Units come with really spacious living, dining and kitchen areas including service and laundry areas. Lot areas on Simeona come larger than anywhere else which allow residents to customize their house units in the future as their family grows. It has a 5-meter rear and front setbacks. Houses on turn over have also the most diverse finishings at the Birmingham Simeona that include: long span colored roof, steel trusses as roof framing, tiled bathrooms, steel casement windows, complete bathroom fixtures, complete and efficient electrical wiring and fixtures, complete water plumbing and piping systems and fixtures, and other heavy-duty deliverables not commonly found in other housing developments of most developers.

Homeowners DC Birmingham Simeona in Marikina City, Philippines is a premier House & Lot project available for sale. If you're looking to rent or purchase Birmingham Simeona, then check here first. We have full details of Birmingham Simeona updated regularly as well as everything you need to know about the availing and booking process, broken down into stages that includes selecting a unit, choosing a payment plan and buying your dream home at the right price. For price list, free site tripping or showroom visit, personalized service, model house, unit plans, floor plans, payment terms, CHAT LIVE with an agent 24x7. Always only buy from PRC licensed Real Estate Brokers and Agents.

Why Invest In  Birmingham Simeona

The HDC’s Birmingham brand of projects are usually large executive style properties with lower price tag compared to some high-end residential developments in Metro Manila, including in the provinces. Nevertheless, its residential developments are comparable in qualities to these upscale projects. Today, the HDC’s Birmingham portfolio, especially Simeona, reflects and inspires a much broader range for house and lot buyers, encompassing medium to large-scale developments in towns, cities and the provinces. These properties have equally admirable qualities and touted to be timeless in style and architecture, your house unit will never be obsolete, but more to appreciate steeply during the course of time.

Down payment payable in 12, 24 months

House units at the Birmingham Simeona are not there for a hard picking, in fact, it could be yours in easy processing and in low down payment (DP). While other developments are asking for 25 to 30% of TCP (total contract price) for DP, HDC is only requesting for a maximum 20% of TCP as DP. Moreover, DP is payable in 12 or 24 months, without interest.

Marikina City is a prime destination

The proximity of Marikina to major cities of Metro Manila (like Quezon City, San Juan, Pasig and the Ortigas Center) makes it more necessary to acquire a piece of Birmingham Simeona as a permanent resident as these cities have more corporate offices, medical and educational institutions, shopping havens and other key destinations that they offer and all are near the project. Not to mention Marikina’s own commercial and other important establishments near the project’s vicinity. In other words, the site is a perfect location for a peaceful, serene and easy to reach residence that will surely benefit from the city’s continuous evolution and rapid economic transformation. Your investment will surely has a long way to go! 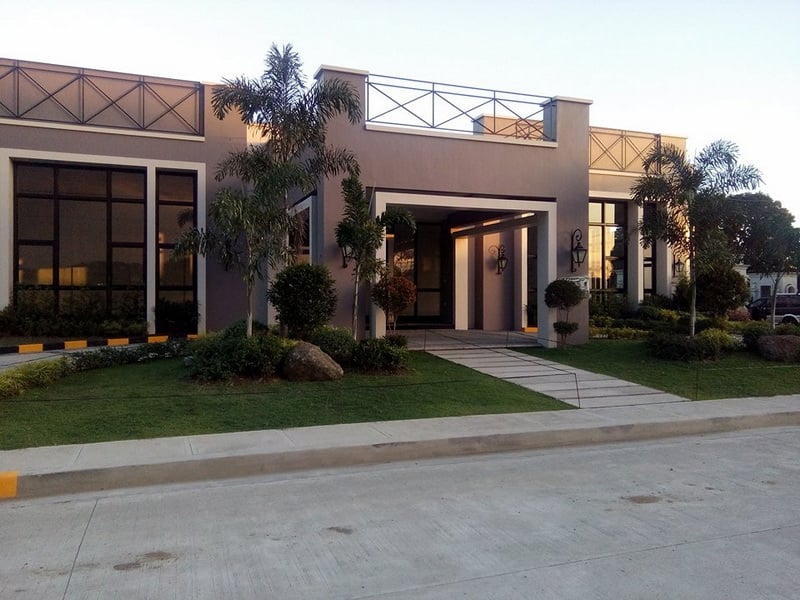